Nov 18, 2020 by Stephanie Rutherford · This post may contain affiliate links · This blog generates income via ads

This apple Nutella dessert pizza is the type of dessert that just WORKS. It has a homemade pizza dough that is topped with apples coated in an apple cider sauce and a cinnamon oat crumble. This pizza is also topped with a Nutella ganache. The cinnamon, apples, and Nutella blend together so well and creates quite a dessert showstopper.

This pizza dough is a staple for when I make savory pizza at home. It creates a soft pizza dough that gets crispy in the oven.

For this recipe, I used a stand mixer with a dough hook. Look below for instructions on making it by hand.

Start by sifting the bread flour and salt together. This will get rid of any flour lumps.

Then, mix the yeast, sugar, water, and oil together in the mixing bowl. The most important part here is to make sure the water is warmed to 110F. Use a thermometer to make sure it is at the right temperature. Too warm or too cold water will prevent the yeast from rising.

Next, add in the flour and mix on low until the dough starts to form. Then, turn the mixer to medium and let it knead for 5 minutes. This helps to form the gluten. Halfway through, if the dough looks too sticky, add an extra ⅛ cup of bread flour at a time. The dough should be slightly tacky, but not stick to your hands.

Place the dough ball into a bowl that has been sprayed with non-stick spray. Cover with a dish towel and let it rise for 30 minutes.

Bread flour has a much higher amount of gluten compared to all-purpose flour. This will create a much softer bread-like consistency in the bread dough.

If you can't find bread flour in your local grocery store, you can use all-purpose flour. However, it will create a dough that doesn't rise as much, and the crust will be a little tougher.

Making The Dough By Hand.

To make the dough by hand, sift the bread flour and salt in a separate bowl. In a large mixing bowl, mix the yeast, sugar, water, and oil with a whisk. Add all of the flour into the large mixing bowl.

Next, switch to a rubber spatula and fold in the flour until a dough starts to form. Then, place the dough on a lightly floured surface.

Knead with your hands for 10 minutes to form the gluten properly. At this point, if the dough is too sticky, then add in ⅛ cup of bread flour at a time.

Making A Perfectly Round Pizza

Since you are making this pizza from scratch, you want to make sure it is round! You don't want an awkward oval/rectangle shape.

Use your fingers to knead and spread the dough into an even circle. Once it starts to shrink back and won't spread anymore, grab the dough by the edges.

Lift the dough up slightly to allow the gravity to stretch it. Go along all the sides. Then, use your fingers to shape it back into a circle.

The cinnamon oat crumble needs to be chilled in the fridge while you make the apple Nutella dessert pizza. So make this right after you make the dough.

First, use a fork and mix the flour, brown sugar, oats, cinnamon, and melted butter together. Once it is all wet, stick it in the fridge for the butter to solidify again.

What Type Of Apples To Use

I recipe tested this pizza with granny smith apples and thought they were way too tart with the Nutella. This recipe needs Gala apples because they are a pretty sweet apple. These should be easily found at your local grocery store.

First lay out the apple cider apples in a swirl pattern on top of the pizza dough. Start with the edges and place each apple carefully. Then move into the middle. It should be a thin layer.

Next, top with the oat crumble. You can use as much as you would like!

While you make the pizza, the oven should be preheating. While it is preheating, the pizza stone should also be in the oven. Using an actual stone will create a crispy crust. Also, a hotter pizza stone helps with the crispier crust.

Next, place the pizza with the parchment paper onto the hot pizza stone. An easy way to transfer the pizza is placing it on a large cutting board before sliding it onto the pizza stone.

Bake the pizza for 10-13 minutes. The crust should be lightly golden brown.

After it is done baking, transfer the pizza to a cutting board. Then, remove the parchment circle.

While the pizza is baking, start the Nutella ganache.

First, spread the Nutella on the bottom of a small bowl. The idea is to spread it evenly for the cream to cover it. Dice up the butter and spread it on top of the Nutella.

Next, heat the heavy cream and corn syrup in a saucepan. Heat until the cream is hot. Pour the hot cream over the Nutella. Use a rubber spatula to make sure the cream is coated evenly.

Top the bowl tightly with cling wrap. Let it sit for 5 minutes for the cream to melt the butter and Nutella. Next, stir the Nutella with a rubber spatula. If there are any butter flecks left in the Nutella, heat it in the microwave for 10 seconds. Then, stir again.

Right when the pizza is done baking, drizzle the pizza with the Nutella ganache. You can use a squeeze bottle, piping bag, or a spoon to drizzle the ganache on top.

Next, top the pizza with mini chocolate chips.

Slice the apple Nutella dessert pizza into eighths and serve immediately. Use a sharp knife rather than a pizza wheel for best results. The pizza is best straight from the oven.

This apple Nutella dessert pizza is best straight from the oven. If you have any leftovers, wrap the pizza in foil.

To reheat, preheat heat the oven to 350F. Place the pizza on a cookie sheet and bake for 5-10 minutes. Bake until the pizza is hot again.

I recommend not using a microwave. It doesn't reheat as well in the microwave.

Make sure to tag me on Instagram @stephaniesweettreats and leave me a review below if you made this dessert pizza. I hope you loved it! To get more ideas follow me on Pinterest. 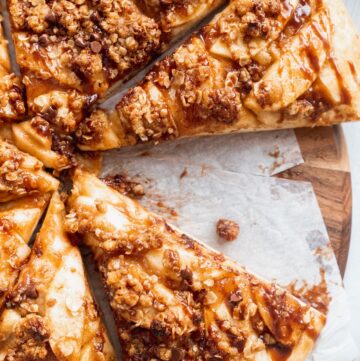