Aug 24, 2020 by Stephanie Rutherford · This post may contain affiliate links · This blog generates income via ads

What makes these muffins stand out from any regular cinnamon muffins, is the cinnamon roll topping. The best part about a cinnamon roll is the filling. It has melted butter, cinnamon and brown sugar, all mixed into the muffins.

Not only is it mixed into the batter, the filling is also on top of the muffins acting as a crumble topping. There is cinnamon throughout the entire muffin. It is not lacking in flavor, that is for sure.

You can't have a cinnamon roll without cream cheese glaze! It is drizzled on top, which completes the entire muffin.

For these muffins, I strongly recommend making them in a jumbo muffin tin. It bakes tall and creates a bakery style type muffin. You can also use a regular 12 cup muffin tin. It is just more special when you make them jumbo.

Here are my best tips to bake the cinnamon muffins with cream cheese glaze:

Filling and Baking The Muffins

To fill the muffins use a cookie scoop. If you are making these with a jumbo pan you can even use a large ice cream scoop! This is the easy and mess free way to get an even amount of batter in each muffin.

Next, fill the batter up ¾ full. Then, take the cinnamon roll filling and sprinkle it on top. Now, don't go crazy and use a lot of the filling. Since it is brown sugar and melted, it will go everywhere if it's just too much. If you want more on the muffin, add the extra after it is baked.

Then, bake these muffins first at 425F. The high heat helps to get a higher rise in the muffin and helps to crisp up the tops. Then, lowering the heat as muffins continue to bake will help make sure they don't dry out.

If you do make these muffins in a 12 cup muffin tin, it will need far less time than a jumbo muffin tin.

The Rise On These Muffins

Okay, honest talk here. Since there is a lot of extra sugar and butter in the muffins from the filling, it does effect the rise in the muffin. It doesn't rise as high as a bunch of the other muffins on my blog, like the lemon blueberry muffins.

The muffins do appear slightly flat, but they definitely do rise. They are packed with cinnamon flavor though!

Since there is also so little of this glaze, it is easiest to make with a hand mixer. It gives you more control over blending the cream cheese. You can also add all of the sifted powdered sugar at once and blend it until smooth.

The vanilla bean paste makes this glaze so fun. There are tiny speckles in the glaze which gives it a bit more character. You can also use pure vanilla extract if you don't have the paste.

Before you drizzle the cream cheese glaze, make sure the muffins are completely cool. Otherwise the glaze will melt!

How To Store The Cinnamon Roll Muffins with Cream Cheese Glaze

If you don't eat them right away, store these muffins in the fridge in an air tight container. Since it has cream cheese, it will need to be cooled. Store them in the fridge for up to 5 days.

Yes you can freeze the cinnamon roll muffins. Before you glaze them, wrap them up individually with cling wrap and store in an airtight container for up to 30 days.

Allow the muffins to thaw on the counter for 1-2 hours before glazing and eating.

Other Muffin Recipes To Try

Make sure to tag me on Instagram @stephaniesweettreats and leave me a review below if you made these muffins. I hope you loved it! To get more ideas follow me on Pinterest. 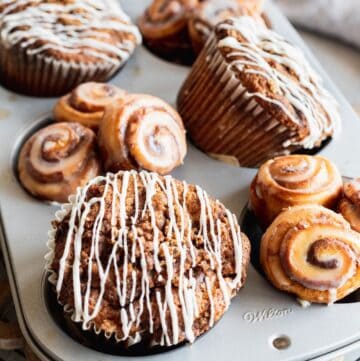 High altitude baking- add in 2 extra tablespoon of flour. Flour- make sure flour is spooned and leveled in a measuring cup. Buttermilk substitution- ½ cup milk plus ½ tablespoon of lemon juice. Make sure all dairy ingredients are room temperature.