Pumpkin spice french toast is perfect for a fall brunch! This recipe uses pumpkin butter fresh from a farm. It is loaded with spices and topped with a homemade cinnamon whipped cream.

What Is Pumpkin Butter?

This pumpkin spice french toast is loaded with pumpkin and cinnamon flavor. I got a jar of pumpkin butter at a farm and I wanted to create a recipe that uses it. This recipe is for everyone that also got pumpkin butter and had no idea what to use it for!

How To Make French Toast Batter

To make the batter, you only need 2 super easy steps. First, you will need a deep bowl. I used a casserole dish.

What Type Of Bread To Use

To make french toast, it has to be thick cut bread. I prefer a Texas Toast bread.

You can use any type of bread, as long as it's thick cut!

Frying The French Toast On A Skillet

Now, you can use a regular frying pan on the stove, that just takes forever to cook them all! Especially cooking for more than 1 person.

I love this electric skillet, it is pretty high quality and has gotten through so many pancakes!

Melt 1 tablespoon of butter on the skillet. Frying french toast in butter makes them taste so much better!

Dunk the bread in the batter. Soak each side and then place on the skillet.

Cook each side until it is golden brown. Eat them right away!

When using a skillet, I can get up to 8 slices cooking at a time. However, the butter using gets all used up!

Make sure to cut off another tablespoon of butter and melt it before frying the next set of pumpkin spice french toast.

Also, halfway through cooking the cinnamon gets absorbed into the earlier bread. Dash a little more cinnamon in the batter. It will make it taste so much better!

This whipped cream isn't necessary for this pumpkin spice french toast, but it makes it more fun.

Whenever I whip up whipped cream, I always freeze the metal bowl and whisk attachment. A cold bowl will keep the cream cold as the mixer whips it up.

Keep this whipped cream cold until you are ready to use it.

You can also re-whip it up if it is in the fridge for over 24 hours and it deflates.

How To Store The French Toast

Store the french toast in an air tight container in the fridge. It will last up to 5 days.

To heat it back up, cook it in a toaster oven or regular oven at 350F. Heat for 5-8 minutes just until it is hot. This will keep the crispiness.

Make sure to tag me on Instagram @stephaniesweettreats and leave me a review below if you made this french toast. I hope you loved it! To get more ideas follow me on Pinterest. 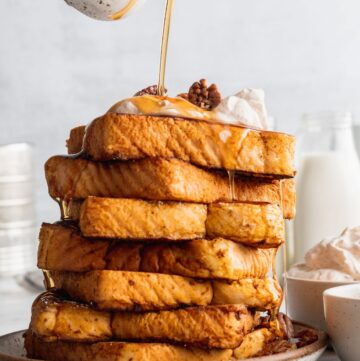 If you don't have pumpkin butter, substitute ¾ cup of pumpkin puree. Keep everything else the same.

Here is more about me.