Nov 10, 2021 by Stephanie Rutherford · This post may contain affiliate links · This blog generates income via ads 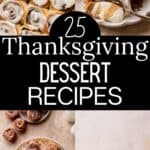 I don't know about you, but my favorite part about Thanksgiving is the dessert. I have compiled my top 25 Thanksgiving dessert recipes. This includes, pie, cake, savory sides, and breakfast. My specialty is cheesecakes, so there is 10 cheesecake recipes.

I hope you love my top 25 Thanksgiving dessert recipes!

This Oreo cheesecake has an Oreo crust, Oreo pieces and Oreo crumbs in the cheesecake, chocolate ganache, and Oreo whipped cream.

This tiramisu cheesecake has an Oreo and lady finger crust. It is filled with an espresso cheesecake and topped with lady fingers and whipped cream cheese.

This cheesecake is a old one on my site. It has a pecan graham cracker crust, layer of cheesecake, and a layer of pumpkin cheesecake. It is topped with whipped cream and more pecans.

This snickers Cheesecake is SO good. It has an Oreo crust, creamy baked cheesecake filled with chopped Snickers. It is topped with salted caramel and more Snickers.

These rolls are super fluffy dinner rolls! They are filled with garlic, rosemary, and cheddar cheese. They are topped with parmesan cheese.

This cornbread is a one bowl recipe. It is a fluffy honey cornbread topped with honey butter.

This chai spiced sheet cake is a moist and fluffy chai spiced cake. It is topped with a cream cheese and chocolate frosting swirl.

These cinnamon rolls are ultra gooey! They are a super soft dough filled with cinnamon filling and topped with cream cheese glaze.

These danishes uses frozen puff pastry and cream cheese filling. They are topped with chocolate ganache.

These strawberry danishes use frozen puff pastry and cream cheese filling. It is topped with strawberries and lemon icing.

These super fluffy scones are filled with mini chocolate chips. They are stuffed with chocolate.

These muffins are super easy to make and are a no mixer required recipe. They are soft pumpkin muffins filled with mini chocolate chips.

These pumpkin donuts are super easy to make and full of spice. It is topped with maple glaze.

These pumpkin cinnamon rolls have pumpkin in the dough and the filling. They are topped with cream cheese glaze.

These cinnamon rolls are a soft dough full of walnut cinnamon filling and topped with maple glaze.

If you loved any of these top 25 Thanksgiving dessert recipes, make sure to pin this on Pinterest!