Oct 6, 2021 by Stephanie Rutherford · This post may contain affiliate links · This blog generates income via ads

This apple cider cake is the definition of fall for me. During fall, I love to get an apple cider donut from an orchard. There is nothing better! This cake tastes just like that. Even better because it also has a glaze!

Here are the steps to make and bake the cake.

STEP 2: Mix dry ingredients together. Make sure to use a sifter to prevent flour lumps from getting into the batter.

STEP 3: Mix the wet ingredients. Then, mix the oil, eggs, brown sugar, sugar, apple sauce, apple cider, and vanilla together. It will be watery.

STEP 4: Mix both together. Mix the dry ingredients into the wet, mix until just combined. Over mixing the batter will lead to a tough cake.

STEP 5: Bake the cake. Pour the batter into the bundt pan. Bake for 45-55 minutes. Cool the cake for 10 minutes in the pan to help keep the cake from sticking to the pan.

First, brown the butter until the milk deposits separate and turn amber in color. Mix with the apple cider.

Coat the cake with the brown butter. Be generous!

Next, use your hands to coat the cake in half of the cinnamon sugar. Let it sit for a few minutes for cinnamon sugar to soak into the butter.

Now, top the cake with the apple cider glaze. I used all of the glaze. It should be thin enough to pour on to the cake.

Yes you can. It will just make a smaller in cake. It will taste the same!

Can I make this into donuts?

Yes you can. Use a donut pan and bake for 10 minutes.

Can I use apple juice?

I have not recipe tested this. If you use it, make sure it is unsweetened.

Store this apple cider donut cake at room temperature in an air tight container. Store up to 5 days.

Freeze the cake into individual cake slices. Wrap them in cling wrap and store in the freezer up to 30 days.

Thaw for 1 hour before eating.

Other Fall Recipes To Try 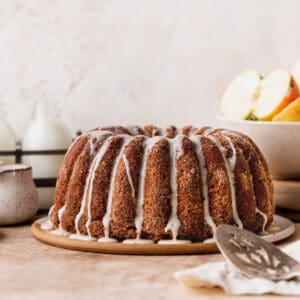 Flour- Make sure flour is spooned and leveled or use a scale. Compacted flour can cause a dry cake. High altitude baking- Add 3 extra tablespoon of flour Cake- Make sure eggs and apple cider are room temperature before baking.