Aug 4, 2022 by Stephanie Rutherford · This post may contain affiliate links · This blog generates income via ads 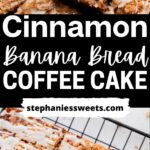 My favorite part about this cake is the texture. The actual cake is very soft and moist with a great banana flavor. Then, topping adds a great crunch. The texture is just perfect.

While there are 4 parts to this recipe, none of it requires a mixer, so it is actually really easy to make.

Recipe note- This used to be a bundt pan recipe but I updated the recipe, so it is easier to make.

Here is how to make and bake this coffee cake banana bread. You don't need an electric mixer for this recipe. It can be made by hand! You will need a 9X9-inch square pan.

The best way to mix is to use a fork. Once it is almost mix together, use your hands to clump it together. Chill in the fridge while you make the rest.

STEP 2: Make the cinnamon filling. In a small bowl, mix the brown sugar and cinnamon.

STEP 3: Mix the wet ingredients. In a large bowl, mix the melted butter, brown sugar, sugar, eggs, sour cream, vanilla extract, and mashed bananas. Use a whisk to mix it together.

STEP 4: Add the dry ingredients. Next, add the flour, baking soda, salt, and cinnamon. Make sure to mix until just combined. Don't over mix the batter.

STEP 5: Pour the batter. Pour half of the banana bread batter into the prepared pan. Use a rubber spatula to smooth it evenly. Sprinkle all of the cinnamon filling on top.

Spread the rest of the banana batter on top. Then, take the streusel out of the fridge and use your hands to sprinkle it on top.

STEP 6: Bake. Bake the cake for 40-45 minutes. Let the cake sit in the hot pan for 10 minutes before placing on a cooling rack.

Add the vanilla glaze on top of the hot cake!

Can this be made in any other pans?

8X8-inch square pan will not work, because it will be too thick and will not bake properly. However, you can double the recipe to use a 9X13-inch baking pan.

A coffee cake is a single layer cake with a cinnamon flavor with a streusel on top. Which is what this is, except with banana too!

Store the banana bread coffee cake in an airtight container at room temperature up to 5 days.

Wrap the individual slices in plastic wrap or use an airtight container. Freeze up to 30 days.

Thaw on the counter for 1-2 hours before eating.

Other Cinnamon Recipes To Try 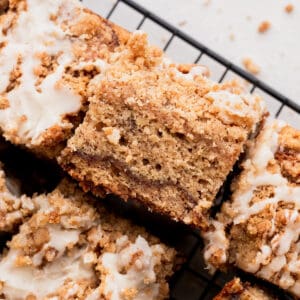 This banana bread coffee cake is a banana bread baked in a square pan with a cinnamon swirl filling. It is topped with a cinnamon streusel and a vanilla glaze. It has a crunch on top with a super soft cake!
5 from 6 votes
Print Recipe Pin Recipe
Prep Time 25 mins
Cook Time 40 mins
Total Time 1 hr 5 mins
Course Breakfast, Dessert
Cuisine American
Servings 16 slices
Calories 289 kcal

Flour- Make sure flour is spooned and leveled or use a kitchen scale. Compacted flour can dry out the cake. High altitude baking- Add an extra 2 tablespoon of flour. Pull out dairy ingredients 2 hours before baking.