Nov 10, 2022 by Stephanie Rutherford · This post may contain affiliate links · This blog generates income via ads 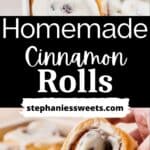 These homemade cinnamon rolls are homemade rolls that are as soft as a pillow. The dough is so soft, the outside of the roll is just as gooey as the middle! They are filled with a cinnamon filling and topped with cream cheese glaze.

Cinnamon rolls are a family favorite, so I have spent a lot of time perfecting these into the best cinnamon roll recipe. These are the perfect way to start the day on a special occasion like Christmas morning.

Here is how to make and bake this cinnamon roll dough.

The dough is made with a stand mixer with a dough hook attachment. If you don't have an electric mixer with dough hook instructions for kneading by hand are included.

It will be foamy at the end of the 10 minutes

STEP 2: Mix the dry ingredients and the butter. In a large mixing bowl, mix the all-purpose flour, white sugar, salt, and cinnamon. Then, pour in the cubed butter. Use either a pastry cutter or your hands to cut the butter into the flour mixture.

STEP 3: Mix eggs and yeast. In a separate bowl, lightly beat your eggs. Add the eggs and yeast mixture to the dry ingredients. Mix on low speed until a dough starts to form and some flour is incorporated. Then, set to medium speed and knead for 5 minutes.

If kneading by hand, use a rubber spatula or wooden spoon and mix until a dough starts to form. Turn the dough onto a floured surface. Knead for 5 minutes until a soft dough ball forms.

Let the cinnamon rolls rise for 1 hour. It will be double in size.

STEP 2: Spread cinnamon mixture filling on top of the dough. I used an offset spatula to spread it on.

STEP 3: Roll the dough into a log. Start with the short side, not the long side, so you get as many swirls as possible. It should be tightly rolled, but not too tight.

STEP 6: Set oven temperature to 375 degrees F and bake in preheated oven for 20-25 minutes until top of the rolls are light golden brown.

Beat the cream cheese and butter on high speed for 1 minute. Add in the powdered sugar, and mix on low until it is creamy.

Add the vanilla extract and milk and mix on low until smooth and pourable.

Immediately after pulling the rolls out of the oven, spread the cream cheese frosting on top of the cinnamon buns with a spoon.

For overnight rolls, once you are done kneading the dough place in a large bowl sprayed with nonstick spray. Then, cover with plastic wrap. Store in the fridge overnight. It needs to chill for a max of 16 hours for best results.

The rolls rise best in a warm area. If your oven is busy, you can let the dough rise at room temperature as long as you don't have a cold house.

Yes you can! Follow the instructions, but bake for only 10 minutes and chill. Then, you can bake the rest of the way (10-18 minutes) the next day until hot.

Store these homemade cinnamon rolls in an airtight container in the fridge. Store up to 5 days. Warm rolls are the best cinnamon rolls, so heat them in the microwave before eating them.

These homemade cinnamon rolls can be frozen in 2 ways.

Other Breakfast Recipes To Try 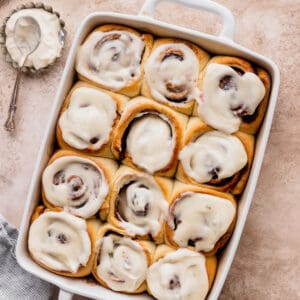 Flour- Make sure flour is spooned and leveled or use a kitchen scale. Compacted flour can dry out the dough. High altitude baking- Add an extra 1-2 tablespoon of flour while kneading if dough is too sticky. Overnight Instructions: Allow the dough to do the 1st rise overnight. Cover the bowl very tightly with cling wrap. Rise overnight. (8-12 hours is okay. Don't go over 16 hours) Roll the dough out like normal. The second rise should be at least 1 hour or until the dough is room temperature.