Nov 11, 2022 by Stephanie Rutherford · This post may contain affiliate links · This blog generates income via ads 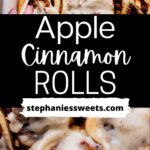 These apple cinnamon rolls are super gooey and soft rolls. They are full of cinnamon filling, diced apples that are coated in spices. The rolls are topped with cream cheese brown butter icing.

This post is sponsored by Cuisinart and all thoughts and opinions are my own. Thank you for supporting the brands that make Stephanie’s Sweet Treats possible!

These apple cinnamon rolls are the perfect breakfast to start your morning with the combination of apples and cinnamon. This time of year I want apple flavored everything. What goes better with apple than homemade cinnamon rolls?

I used Cuisinart's Precision Master™ 5.5- Quart Stand Mixer to make the dough for these rolls. I used the dough hook to knead it into a super soft dough.

The Best Equipment To Use

When I make cinnamon rolls, I love using a stand mixer with a dough hook. It makes the process so much easier! I used Cuisinart's Precision Master™ 5.5- Quart Stand Mixer to make the dough.

Their mixer has a 500 watt motor with 12 speeds! They have a section for the dough hook, paddle attachment, and the whisk attachment right by the speed dial.

This made it very handy to figure out the best speed to set the mixer to when kneading the dough.

It also comes in so many colors! I got the coral pink one.

Here is how to make and bake this apple cinnamon roll dough.

The dough is made with a stand mixer with a dough hook attachment. If you don't have an electric mixer with dough hook see the making by hand instruction in the recipe notes.

It will be foamy at the end of the 10 minutes.

STEP 2: Mix the dry ingredients and the butter. In a large mixing bowl, mix the all-purpose flour, white sugar, salt, and cinnamon. Then, pour in the cubed butter. Use either a pastry cutter or your hands to cut the butter into the flour mixture.

STEP 3: Mix eggs and yeast. In a separate bowl, lightly beat your eggs. Add the eggs and yeast mixture to the dry ingredients. Mix on low speed until a dough starts to form and some flour is incorporated.

STEP 4: Knead the dough. Turn to medium speed and knead for 5 minutes. It should be slightly tacky, but not stick to your hands too much.

Rise for 1 hour. It will be double in size.

STEP 6: Beat the filling. In a small bowl, using a hand mixer, beat the unsalted butter, brown sugar, and ground cinnamon until smooth.

STEP 7: Prep the apples: Cut the apples into small pieces. Larger pieces will not roll in correctly. Pour the apples into a separate bowl and mix them with the cinnamon, ground ginger, and nutmeg.

STEP 2: Spread cinnamon filling on top of the dough. I used an offset spatula to spread it on. Then, sprinkle the apples on top.

STEP 3: Roll the dough into a log. Start with the short side, not the long side, so you get as many swirls as possible. It should be tightly rolled, but not too tight.

STEP 6: Bake for 22-28 minutes until top of the rolls are light golden brown.

Start by browning the butter. Melt the butter in a frying pan over medium heat. Then stir until milk deposits separate and it turns amber in color. Pour the butter in a bowl and let it cool for 15 minutes.

After it is cooled, beat the cream cheese and brown butter on high speed for 1 minute. Add in the sugar, vanilla extract, and milk and mix on low until smooth and pourable.

Immediately after pulling the rolls out of the oven, spread the cream cheese frosting on top of the cinnamon buns with a spoon.

The rolls rise best in a warm area. If your oven is busy, you can let the dough rise at room temperature as long as you don't have a cold house.

Yes you can! Follow the instructions, but bake for only 10 minutes and chill. Then, you can bake the rest of the way (10-18 minutes) in the morning until hot.

Store these apple cinnamon rolls in an airtight container in the fridge. Store up to 5 days. They are best when heated in the microwave until warm.

These apple cinnamon rolls can be frozen in 2 ways. 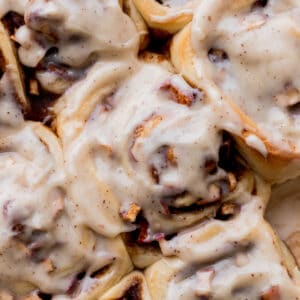 Flour- Make sure flour is spooned and leveled or use a kitchen scale. Compacted flour can dry out the rolls. High altitude baking- Add an extra 3 tablespoon of flour. Pull out dairy ingredients 2 hours before baking. Making by hand: Mix the wet ingredients into the dry by using a rubber spatula. Switch to using your hands to mix until a dough starts to form. Place dough on a lightly floured surface. Knead using your hands for 5-8 minutes. It is done when your spread the dough apart thinly using your fingers. Hold the dough to the light. If you can see light through it, then it is done. Brown butter: This is part can be skipped. You can also melt the butter instead of browning it.