Jul 13, 2021 by Stephanie Rutherford · This post may contain affiliate links · This blog generates income via ads 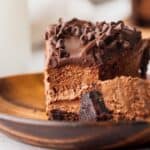 Here are the notes about the ingredients that are used.

Here are the instructions to make this rich chocolate cheesecake.

STEP 1: For the brownies, mix the dry ingredients together. Then use a bowl of a stand mixer with a whisk attachment to beat the sugar and eggs on high speed.

This gives the brownies a crackle top. Add in the rest of the wet ingredients.

STEP 2: Next, fold in the dry ingredients. Then, fold in the chocolate chips. Bake the brownies for 60-70 minutes.

Use the middle and only ¾ of the brownies. The rest can be used for eating.

Use the 9 inch springform pan with a 9 inch parchment paper on the bottom. Mold the brownies up the sides of the pan and bottom.

STEP 4: Beat the cream cheese until fluffy. Add in the sugar and cocoa powder. Mix on medium high speed until thoroughly combined. Scrape the bowl. Fold in the chocolate ganache.

STEP 5: Make the whipped cream. Instructions are in the recipe card. Fold it into the cream cheese mixture. This takes a few minutes. Keep folding until combined.

Pour the cheesecake filling into the brownie crust.

STEP 6: Chill overnight. Then, make the chocolate ganache. Mix the heavy cream and chocolate chips together in a small bowl until creamy.

Chill in 10 minute intervals until it becomes a frosting like texture. Next, spread an even layer over the top of the cheesecake. You can decorate it with chocolate chips or chopped chocolate.

Be careful that the brownies are not overbaked or under baked. If it is under baked, it will be too fudgy to form into the crust. I tried this my first time. Then, I tried baking it as the crust. It didn't work.

If the brownies are over baked, it will be too hard to form into the crust.

To prevent cream cheese lumps, beat the cream cheese, sugar, and cocoa powder very thoroughly. Scrape the bowl several times during this process. Once you add the whipped cream, there is no going back to get rid of lumps.

Make sure the cheesecake is chilled overnight or at least 6 hours. If you cut into it too soon, it will be like soup. It needs to completely set.

Can I do an Oreo crust?

Why is my cheesecake gritty?

You will need to sift the cocoa powder. A lot of cocoa powders are very lumpy. This will fix the problem.

Can I pour cheesecake ganache on top instead?

Yes you can. It doesn't have to be a frosting.

What is the cheesecake doesn't set?

This no bake brownie chocolate cheesecake needs to be stored in the fridge in an airtight container like this cake carrier. It will last up to 5 days in the fridge. 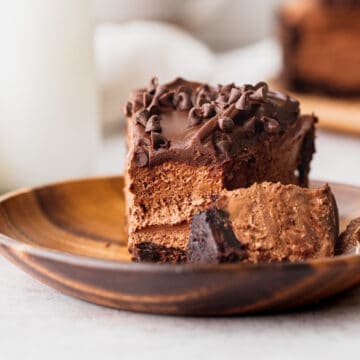 Brownie high altitude baking- Add an extra tablespoon of flour. Flour- Make sure it is spooned and leveled or use a kitchen scale. Compacted flour can dry out the brownies. The brownies need to be formed while warm and still fudgy. If they cool, they won't form into the crust.