Jun 8, 2021 by Stephanie Rutherford · This post may contain affiliate links · This blog generates income via ads 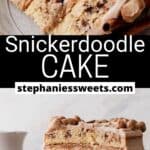 This cake can be made with or without the cookie dough. However cookie dough with cake is SO good!

This cake is perfect for the holiday season or a special occasion.

The snickerdoodle cake is a soft vanilla cake that has cinnamon swirls in the middle. Here are the steps to make it. This recipe uses a stand mixer with a paddle attachment or hand mixer (electric mixer).

STEP 2: Mix wet ingredients- Start by beating the butter, oil, and sugar in a large bowl for 3 minutes on high speed. It will turn almost white in color and be very fluffy.

Next, add in the vanilla and eggs and mix on medium speed. Make sure to scrape the sides of the bowl.

STEP 4: Mix together the cinnamon swirl mixture- First, mix all the dry ingredients together in a small bowl. Then, add in the melted butter. Use this right away.

STEP 5: Scoop and swirl- Scoop the cinnamon mixture by a half teaspoon. Scoop into the prepared pans.

Use a third of the mixture per cake layer. Use a butter knife to swirl in the cinnamon into the cake batter.

STEP 6: Bake the cake- Bake the cake for 20-25 minutes. It will be done cooking when a toothpick inserted comes out clean.

Cool the snickerdoodle layer cake on a wire rack.

This snickerdoodle cookie dough is so addicting! It is hard not to snack on it all while decorating the cake. Normally snickerdoodles are rolled into the cinnamon sugar. Instead I folded in a cinnamon mixture to get swirls of cinnamon.

First, you need heat treated flour. Cook the flour on 300F for 5 minutes, so it is safe to eat. Wait until the flour cools completely before using.

Next, beat the butter and sugar until light and fluffy. Then, add in the vanilla and milk. Once it is light, add in the dry ingredients. It will make a very soft dough.

Add in the cinnamon mixture slowly so it can swirl into the dough. Once combined, place the cookie dough into the fridge to chill while you make the frosting.

Beat the butter and cream cheese on high for 2-3 minutes until light and fluffy. There should be no chunks remaining. Then, add in the powdered sugar and cinnamon. To prevent a gritty frosting, make sure to sift the powdered sugar.

After the powdered sugar is added, it will make a very thick frosting. That is okay! Add in the vanilla and heavy cream and beat on high. It will turn into a light and fluffy frosting.

What size cake pans to use?

Can the cakes be made ahead of time?

Yes! Once baked and cooled, wrap in cling wrap and store in the freezer up to 30 days. Let the cakes thaw 1 hour before decorating.

Why does the frosting have so much powdered sugar?

Since this a cream cheese frosting, to get a stiff frosting it needs a lot of powdered sugar. Any less, and it will be like soup.

The snickerdoodle cake can be stored in a cake carrier or cut into slices into an airtight container. Store in the fridge up to 5 days. It will need to be in fridge because of the frosting. The cake is best if enjoyed after it sits on the counter for 30 minutes - 1 hour.

After decorating, wrap the snickerdoodle cake slices into cling wrap tightly. Store in the freezer up to 30 days.

Other Cake Recipes To Try 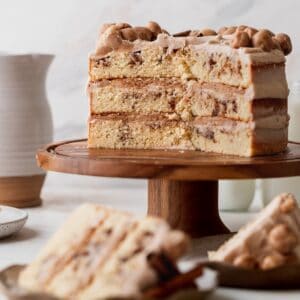 Cookie Dough For heat treated flour. Bake at 300F for 5 minutes. Let the flour cool completely before using. Flour- Make sure flour is spooned and leveled or use a kitchen scale. Compacted flour will dry out the cake. Room temperature ingredients- Every ingredient that says room temperature, pull out 2 hours before baking.