Apr 13, 2021 by Stephanie Rutherford · This post may contain affiliate links · This blog generates income via ads 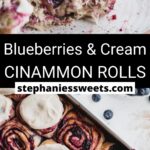 These blueberry cinnamon rolls taste like a berries and cream in a cinnamon rolls! The dough is extra soft and gooey. It is full of cinnamon filling and blueberry preserves. These rolls are topped with cream cheese icing.

These blueberry sweet rolls are perfect for a weekend brunch or for Mother's Day or any special occasion!

Here is how to make and bake these blueberry rolls. This recipe uses a stand mixer with a dough hook attachment. For mixing by hand instructions, see the recipe notes.

The milk needs to be warmed to 110F, the butter needs to be melted and cooled, and the eggs need to be slightly beat for best results.

STEP 2: Knead the dough. Add the all-purpose flour and mix on low speed until a dough starts to from. Then, turn the mixer to medium speed and knead for 5 minutes.

The dough needs to be tacky, but not stick to your fingers.

STEP 3: Rise. Place the cinnamon roll dough in a large bowl sprayed with nonstick spray and place a kitchen towel over it. Place in a warm place to rise for 1 hour.

STEP 4: Blueberry preserves. In a medium saucepan over medium heat, heat the blueberries, lemon juice, sugar, cornstarch, and water. Heat this until the blueberries thicken.

Cool this completely before using.

STEP 6: Cream cheese icing. Using a hand mixer, beat the cream cheese and butter on high speed. Add in powdered sugar, vanilla extract, and milk and mix until smooth. Make this while the rolls are baking.

STEP 1: Roll the dough. Use a rolling pin on a lightly floured surface and roll the soft dough into a rectangle until ¼ inch thick.

Then, cut the rolls using a serrated knife. Use gentle sawing motions to cut the homemade blueberry rolls into 12. You can also use unflavored dental floss.

STEP 4: Rise. Place the cinnamon rolls in a 9X13-inch baking dish. Cover with a clean kitchen towel and rise for 30 minutes.

STEP 5: Bake. Bake the cinnamon rolls for 30-35 minutes. They will be golden brown on the top of the rolls.

STEP 6: Spread the icing. While the rolls are hot, spread the cream cheese frosting on top. This will let it melt in all the cracks.

Can I make these overnight?

Once you make the dough, place it in a large bowl and cover with plastic wrap. Place in the fridge overnight. The max amount of time it should be in the fridge is 16 hours. Afterwards, you can fill and bake as directed.

Why are my rolls tough or hard?

This is either you over measured the flour, or you over baked them. These are extra soft, and they shouldn't be hard.

Can I skip the cinnamon filling?

Store these blueberry cinnamon rolls in the fridge in an airtight container. Store up to 5 days.

These cinnamon rolls are best when heated in the microwave until warm.

These blueberry cinnamon rolls can be frozen. Store in an airtight container and freeze up to 30 days. Heat in the microwave until warm. 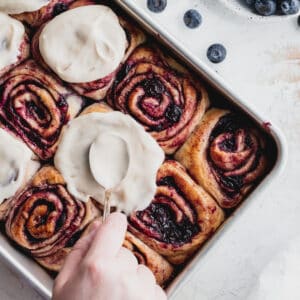 Flour- Make sure flour is spooned and leveled to avoid too much flour in the dough. Hand mixing instructions: Use a whisk to mix the milk, butter, eggs, yeast, salt, and sugar together. Add in flour and use a rubber spatula to mix until dough forms. Place dough on a lightly floured surface and knead by hand for 10 minutes. Follow the rest of the instructions.