Jun 1, 2022 by Stephanie Rutherford · This post may contain affiliate links · This blog generates income via ads 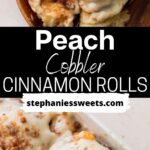 These peach cobbler cinnamon rolls are SO good. You can use either fresh peaches or frozen peaches for this recipe. So, you can make this any time of year, they are perfect for summer or for the holidays!

These rolls are so gooey and soft full of a strong cinnamon flavor mixed with peaches. The peach cobbler part, the peach jam is baked a little chunky and it is topped with streusel.

Here is how to make and bake the dough for the cinnamon rolls. This recipe uses a stand mixer with a dough hook attachment. For instructions about making by hand, see the recipe notes.

STEP 1: Prepare the yeast. First, heat the milk to 110F. Then, sprinkle in the yeast and let it sit for 10 minutes. The yeast will bubble and foam.

STEP 2: Cut in the butter. In a large bowl, mix the all-purpose flour, salt, and white sugar. Pour in the room temperature butter and use a pastry cutter or your hands to cut the butter into a size of a pea.

STEP 3: Add wet ingredients. Add the yeast mixture and eggs to the flour mixture. Place on the mixer and mix on low speed until a dough starts to form. Switch to medium speed and knead for 5 minutes.

STEP 4: Rise. Place the dough into a large bowl that has been sprayed with nonstick spray. Cover with a kitchen towel and let it rise for 1 hour until doubled in size in a warm place.

STEP 1: Peach jam. In a medium saucepan over medium heat, combine juicy peaches, sugar, and lemon juice. Heat for 10-15 minutes for the juice from the peaches to release and it thickens into a jam.

STEP 3: Bake. Spread the topping over a baking sheet and bake for 8 minutes. Let it cool completely on the baking sheet before breaking it into small pieces.

STEP 4: Cinnamon filling. Using a mixer, beat the butter, brown sugar, cinnamon, and salt. It should be like a paste.

STEP 1: Roll. Use a rolling pin to roll the cinnamon roll dough out on a lightly floured surface. Roll it into a large rectangle.

STEP 2: Spread the fillings. First, spread the cinnamon filling over the dough. Use an offset spatula to spread it evenly. Then, spread 1 cup of the peach mixture and sprinkle half of the cinnamon crumb topping.

STEP 3: Roll into a log. Start on the short side and roll the dough into a log. This will be a messy experience! Keep going!

Then, use a serrated knife to cut off the uneven ends. Then, cut into 12 equal rolls and place into a 9X13-inch baking pan.

STEP 4: Rise again. Cover the pan with a kitchen towel and rise for the second time for 20 minutes.

STEP 5: Bake. Bake the rolls for 23-26 minutes until the tops are golden brown.

STEP 6: Peach cream cheese icing. Use a spoon to spread the icing on top of the hot rolls.

Can I prebake the rolls?

Yes you can! Bake for 16 minutes. Then, cover with aluminum foil and set on the counter overnight. Make the icing and store in an airtight container. In the morning, set the oven to 325F and bake until warm. Then, melt the icing in the microwave and pour on the rolls.

Yes it does! It tastes even better because it is homemade. Also these rolls have a lot more cinnamon flavor too.

Can I use a store bought peach jam?

Yes you definitely can!

Store these peach cobbler cinnamon rolls in an airtight container in the fridge. Store up to 30 days.

Make sure to heat in the microwave until warm.

The cinnamon rolls can be frozen. Store in an airtight container in the freezer up to 30 days.

Thaw for 1 hour or just heat in the microwave. 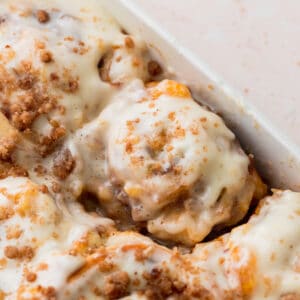 Peach Jam * You can use store bought jam if desired

Flour- Make sure flour is spooned and leveled or use a kitchen scale. Compacted flour can dry out the High altitude baking- Add an extra tablespoon of flour. Pull out dairy ingredients 2 hours before baking. Making by hand: Mix the wet ingredients into the dry by using a rubber spatula. Switch to using your hands to mix until a dough starts to form. Place dough on a lightly floured surface. Knead using your hands for 5-8 minutes. It is done when your spread the dough apart thinly using your fingers. Hold the dough to the light. If you can see light through it, then it is done.