Jan 14, 2022 by Stephanie Rutherford · This post may contain affiliate links · This blog generates income via ads 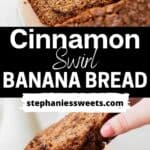 This cinnamon swirl banana bread is so easy, but it packs ALL the flavor. Not only does the banana bread have a little bit of cinnamon, but there is three layers of a thick cinnamon swirl! It is the best bana bread, and one of my favorite recipes.

Here is how to make and bake this cinnamon bread.

STEP 1: Mix wet ingredients together. First, mix the butter, brown sugar, eggs, sour cream, and vanilla together in a large mixing bowl. Then, mix in the mashed overripe bananas.

STEP 2: Add in the dry ingredients. Next, add in all-purpose flour, baking soda, salt, and cinnamon. Fold it in by using a rubber spatula, until just combined. Don't over mix!

Repeat with the second layer and the third layer by using the remaining batter.

STEP 5: Bake the banana bread. Bake for 55-65 minutes. Bake until a toothpick inserted comes out clean. It will be very golden brown on top.

The bananas need to be thoroughly mashed before adding to the batter. I like to mash mine on a plate or baking sheet with a potato masher or a fork.

If you mash them in a bowl, it is harder to mash all the way.

To prevent the banana bread from stick to the pan, spray the lined loaf pan with a baking spray.

Then, line the bottom and two sides of the pan with parchment paper. It need to stick out slightly to be easy to grab out of the pan. Spray the pan again.

What type of pan should I use?

The batter will fit a 9X5 inch loaf pan. If you have an 8X4 pan, fill until ¾ths full. The extra batter can be made into muffins.

Can the sour cream be substituted?

Yes it can. You can use greek yogurt.

Store this cinnamon swirl banana bread in an airtight container. Store up to 5 days. It is best served slightly warm.

You can freeze the cinnamon swirl banana bread in individual slices. Wrap each slice in cling wrap and freeze up to 30 days.

Thaw for 1 hour before eating. You can also warm in the microwave.

Other Banana Recipes To Try 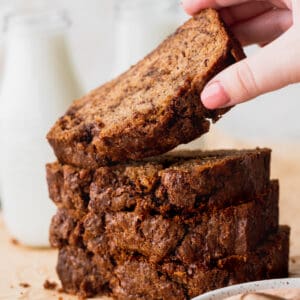 Flour- Make sure the flour is spooned and leveled or use a kitchen scale. Compacted flour can dry out the banana bread. High altitude baking- Add an extra 2 tablespoon of flour.