Dec 8, 2020 by Stephanie Rutherford · This post may contain affiliate links · This blog generates income via ads

These walnut cinnamon rolls are perfect for brunch and combine a sweet and salty touch. These gooey and soft cinnamon rolls have maple walnuts rolled in. They are topped with maple cream cheese frosting and more maple nuts.

This post is sponsored by Diamond of California and all thoughts and opinions are my own. Thank you for supporting the brands that make Stephanie's Sweet Treats possible!

I usually find cinnamon rolls to be super sweet, the addition of the sweet maple walnuts really complements the rolls!

Normally, when I add nuts to baking, they are a plain nut. These sweet maple walnuts however, have this sweet maple coating and they taste delicious! They really helped make these cinnamon rolls special. You can find these snack nuts at Walmart.

I added these walnuts in the filling mixed with the brown sugar and cinnamon. There is a maple crunch in every bite! These rolls are also topped with more of the nuts to pair well with the maple cream cheese frosting.

How To Make The Dough

I prefer to make the dough using a stand mixer fit with a dough hook, but I will include making by hand instructions later.

Next, the dough will double in size as it rises for 1 hour. It will get huge!

If you don't have a stand mixer, that is okay! You can make this dough by hand.

First, mix all of the wet ingredients together in a large bowl. Then, add in the flour. Use a rubber spatula to fold in the flour. Once the dough starts to form, transfer to a lightly floured surface.

Next, knead the dough for 10 straight minutes. Set a timer. It needs enough time to activate the gluten.

After the dough is kneaded, follow the rest of the instructions.

This cinnamon roll filling has the traditional brown sugar and cinnamon. I actually add extra cinnamon for it to have a stronger flavor. The more cinnamon the better!

Once the dough has risen, roll the dough to a 15X24 inch rectangle. It is a large rectangle, so there will be a lot of swirls.

Then, sprinkle the brown sugar/cinnamon mixture over the butter. To evenly spread the mixture around, use your hands to brush it around.

Now it is time for the sweet maple walnuts. Place them in a blender/ food processor. Blend until they are the size of a pea or mini chocolate chip. We want small enough pieces to easily roll the dough. Don't crush them into dust though!

Next, roll up the walnut cinnamon rolls. It needs to be rolled very tightly. If you roll it loosely, there is a chance it could rise straight up while it bakes. (I'm talking about cinnamon roll cones!)

Why Does The Dough Need 2 Rises?

This is actually very important. The first rise is for the yeast to activate with the gluten. This will help create a soft dough.

The second rise is to help the dough after you messed with it while you rolled it. Let the dough rise again for 35 minutes. The cinnamon rolls will grow a lot!

The result will leave you with fluffy rolls! Don't skip that second rise.

Baking The Rolls With Heavy Cream

Okay, I know this may sound odd. This is actually my best cinnamon roll hack! Pouring heavy cream in between the rolls in the pan, guarantees a gooey roll.

The heavy cream bakes right into the bottom of the cinnamon roll. It protects the roll from overbaking on the bottom. The biggest question I get is, "Don't the rolls get soggy?"

NO! I was worried at first too. However, it creates a gooey cinnamon roll in every bite.

This cream cheese icing is super easy to make. The tangy frosting is always perfect with cinnamon rolls. Also, this frosting has real maple syrup to pair well with the sweet maple walnuts.

Once you ice the walnut cinnamon rolls, make sure to top with more sweet maple walnuts. Use a blender/food processor again to chop up the nuts into slightly smaller pieces. They shouldn't be too small.

These walnut cinnamon rolls are best served warm. However, if you make these ahead of time or simply have extras, store covered in the fridge. They will last up to 5 days in the fridge.

To reheat the rolls, heat them in the microwave for 15-30 seconds until the rolls are hot.

Other Breakfast Recipes To Try

Make sure to tag me on Instagram @stephaniesweettreats and leave me a review below if you made these cinnamon rolls. I hope you loved it! To get more ideas follow me on Pinterest. 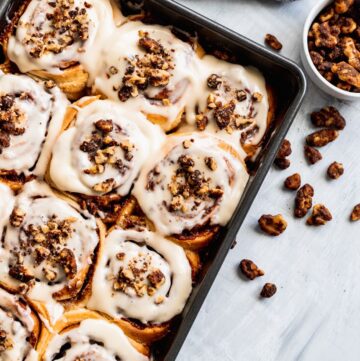 Flour- Make sure flour is spooned and leveled, or it could dry out the dough. Make sure all room temperature ingredients are pulled out 2 hours before baking. For mixing by hand instructions, see blog post.