Nov 23, 2020 by Stephanie Rutherford · This post may contain affiliate links · This blog generates income via ads

What Makes These Homemade Chocolate Cinnamon Rolls SO Good?

This recipe is perfect for weekend brunch! These cinnamon rolls are baked in heavy cream, so every bite is gooey and soft like a pillow. Plus, they are covered in chocolate. Any brunch is better with chocolate.

The dough itself has extra butter, so it is a very soft dough. It is rolled up with brown sugar, lots of cinnamon, and mini chocolate chips. Every single bite will have chocolate chips.

Tips To Make The Dough

This soft dough is made with warm milk and melted butter. Here are the best tips to make this dough with a mixer.

Mixing The Dough By Hand

If you don't have a stand mixer, that is okay! You can definitely make these chocolate chip cinnamon rolls by hand.

First, mix the milk, butter, yeast, sugar, salt, and eggs together with a whisk. Once mixed, add in all of the flour. Switch to a rubber spatula and fold the flour in until a dough starts to form.

Next, transfer the dough to a lightly floured surface and knead by hand. Knead for 10 minutes. If halfway through mixing it is too wet then add a little bit of flour at a time.

Once the dough is kneaded, follow the rest of the instructions.

Rolling Out The Dough

Once the dough is done rising, use a rolling pin to roll the dough into a 15X24 inch rectangle. It should be thin and large.

To easily roll it out, make sure it is on a floured surface.

Once the dough is all rolled out, spread the butter on the dough. It will seem like a lot of butter, but a lot of butter is a good thing! It will soak into the dough as it bakes, so you are left with a buttery cinnamon roll.

Next, sprinkle the brown sugar/cinnamon mixture over the dough. Once you have sprinkled it, use your hands to rub it around evenly. Then, sprinkle the mini chocolate chips on the dough.

Rolling The Dough Into Swirls

Start at the bottom of the rectangle (we are rolling it from the short side so you get more swirls). Make sure to roll them tightly so there aren't any gaps.

Once rolled, use a pastry scraper to cut the dough. To get even sized rolls, make sure to use a ruler. The pastry cutter will flatten the roll slightly, so take your hand and reshape the dough.

The heavy cream will soak into the bottom of the rolls, which will create a soft and gooey cinnamon roll. So, not only just the middle is gooey, the whole roll is!

Don't start making the icing until after the cinnamon rolls are done baking. They need to cool slightly before icing.

There are 2 keys to make this icing:

The cinnamon rolls are best served warm right after you iced them. If you have extras, wrap the pan in foil or store the rolls in an air tight container and store in the fridge.

The best way to heat the rolls is to microwave them for 15-30 seconds. They will last up to a week in the fridge.

Make sure to tag me on Instagram @stephaniesweettreats and leave me a review below if you made these cinnamon rolls. I hope you loved it! To get more ideas follow me on Pinterest. 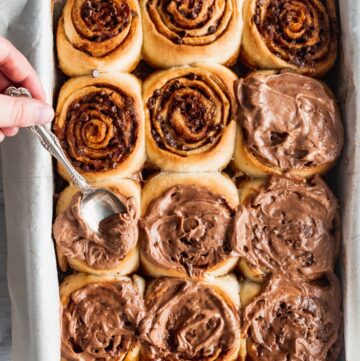 Flour- Make sure flour is spooned and level or use a kitchen scale. Compacted flour can dry out the rolls. Milk- Milk should be around 110F. Too hot or too cold milk and slow the yeast. Melted butter for dough- Make sure the melted butter cools a few minutes before adding to the dough. Making the dough by hands. Use a whisk to mix the slightly beaten eggs, yeast, sugar, salt, warm milk, and melted butter. Add in the flour. Use a rubber spatula to form the dough together. Then place dough on a lightly floured surface. Knead by hand for 10 minutes. Then follow the rest of the instructions.