Jan 21, 2020 by Stephanie Rutherford · This post may contain affiliate links · This blog generates income via ads

I started making this chocolate chip banana bread back when I didn't really know what baking was. I started by using a basic recipe, but over time I found that my banana bread had to up its game. So, this recipe was born.

This cinnamon chocolate chip banana bread is very moist. It not only has cinnamon in the batter, but the pan is coated in cinnamon sugar so that even the crust has an amazing flavor. Then, with those mini chocolate chips, it's melt in your mouth good.

While banana bread is relatively easy to make, there is still a lot that can be improved upon to make it impress your friends.

How Do I Store The Banana Bread

I store it in two different ways. You can wrap the whole loaf in aluminum foil. Also, you can cut it into slices and store in Tupperware. When I made it this time, I stored it in Tupperware because then it was ready to go. It also sealed in all the extra moisture as well.

So, the very first thing I do is coat the pan in cinnamon sugar. The pan I use is this one.

I always have a shaker of cinnamon sugar on hand, but I included in the recipe how to make it (super easy!) and you can sprinkle it on by hand if you don't have a shaker. I am super generous when I coat the pan. After coating I just shake out the extra cinnamon sugar and then pan is all set!

I will probably say this a lot, but sift your dry ingredients! That is my next step after I get my pan all set. I always sift my dry ingredients because it gets rid of any flour clumps and makes for a much smoother batter!

This also includes the cinnamon. I wouldn't say you have to sift the cinnamon, but I always add it to the top of the flour and sift it all together.

Afterwards, it is time to cream your butter and brown sugar together. After beating them together, it is very important to scrape down the side of the bowl before adding the eggs. This will make sure everything gets mixed together. It won't be as fluffy as butter and white sugar, so that is why I always scrape the bowl.

Then, the best part: the mini chocolate chips.

Once you add the batter to the loaf pan, sprinkle more cinnamon sugar on top. I also add a few extra chocolate chips. The top of the bread looks so good with the extra chocolate.

Make sure to tag me on Instagram @stephaniesweettreats and leave me review below if you made this chocolate chip banana bread. I hope you loved it! To get more ideas follow me on Pinterest. 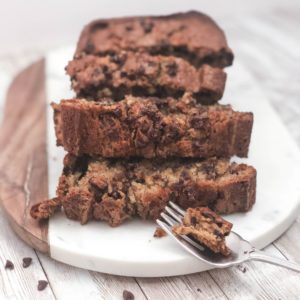 Flour- Make sure flour is spooned and leveled or use a kitchen scale. Compacted flour can dry out the banana bread. High altitude baking- Add an extra 2 tablespoon of flour. Pull out dairy ingredients 2 hours before baking.