Nov 3, 2020 by Stephanie Rutherford · This post may contain affiliate links · This blog generates income via ads

Sometimes I think a regular pecan pie can be a little boring without that much flavor, which is why I added cinnamon to the pecan pie filling and the topping. This cheesecake is not lacking in flavor that is for sure.

This cheesecake is also topped with homemade whipped cream. It creates such a creamy experience in every bite!

Making this pecan graham cracker crust is pretty easy, the addition of the pecans gives it more of a crunch.

The pecans will need to be chopped into small pieces. It should be as big as a pea.

Mix the pecans, graham cracker crumbs, brown sugar, and melted butter with a fork until it resembles wet sand. After mixing the crumbs, it should be all wet. If it is too dry, add an extra 1-2 Tbsps of melted butter.

Pour the crumbs into the spring form pan. Spread it on the bottom of the pan and ⅔rds up the sides of the pan. To really compact it down, use the bottom of a measuring cup. Don't skip that step.

Bake it for 13 minutes. Pre-baking the crust helps to prevent a soggy crust.

How To Prevent The Crust From Sticking To The Pan

Easily removing the cheesecake from the pan starts with how you spray the pan.

Spray a 9 inch spring form pan with baking non-stick spray. Make sure it is the spray with flour in it. Then, place a 9 inch parchment circle on the bottom. Then, spray again.

After the cheesecake cools, it should pop right off. If a side gets stuck, use a knife.

Making this pecan pie filling is similar to making regular pecan pie, but this has cinnamon!

First, melt the butter in a sauce pan. After it is melted, mix the corn syrup, sugar, beaten eggs, cinnamon, vanilla and pecans.

The pecan pie filling will need to be cooked for 5-10 minutes. If you under cook it, it can be runny when you cut into the cheesecake.

Next, pour the filling directly on the cooked crust. It will cool slightly while you make the cheesecake batter.

How To Make Brown Sugar Cheesecake

What makes this cheesecake different is it uses packed brown sugar. It creates a creamier cheesecake. Here are tips on how to make it:

Here are 2 methods you can use for a water bath:

The first method uses a large roasting pan and a 10 inch cake pan. This is the best method because placing the springform pan inside the cake pan prevents any water from getting into the crust.

Fill the roasting pan with boiling water about half way up the cake pan. I strongly recommend this method!

The second method is wrapping the spring form pan with foil. Wrap it twice very tightly. Then, place that in the roasting pan with boiling water. Now, this method definitely works, but there is a chance water can get into the crust.

Water baths are important to prevent the cheesecake from cracking because it creates a moist environment. If it is too dry, it will crack.

Another reason a cheesecake can crack is if it cools too quickly. Placing a hot cheesecake on the counter straight from the oven can be too dramatic of a temperature change and it can crack!

First, turn off the oven and prop open the oven door about 4 inches. Then, let it sit for 30 minutes.

Then, transfer it right away to the cooling rack. It has to cool completely before chilling in the fridge.

The Importance Of Chilling The Cheesecake

Have you ever had a slightly warm or even room temperature cheesecake? Let me tell you, it is the worst! That is why the cheesecake has to cool at least 6 hours but preferably over night.

As a cheesecake cools, it will become more dense and the flavor will intensify. It will be worth the wait!

This pecan topping really takes this cinnamon pecan pie cheesecake to the next level. The pecans are toasted in cinnamon and melted butter!

Toasting pecans gives them a little more flavor, but it really gets upgraded with butter and cinnamon!

To make this topping, first melt the butter in a saucepan. Once it is melted, add in the brown sugar. Now cook the brown sugar for 1-3 minutes. It will be very thick in the beginning, but it will turn into an almost liquid. Then, add in the cinnamon.

Next, add in the heavy cream. The topping will be very bubbly as the cream reacts, but stir until it stops bubbling. Then, add in the toasted pecans.

The mixture will thicken slightly as it cools. It is important to let it cool completely before adding it on top of the cold cheesecake.

How To Get The Perfect Slice

Man, this cheesecake was a lot of work to bake! When you slice into, you don't want messy slices of cheesecake after all that hard work!

To get a clean slice, use a sharp clean knife. After each cut, wash the knife in hot water. A clean knife is key to a perfect slice!

How To Store The Cheesecake

Since this cinnamon pecan pie cheesecake has to be stored in the fridge, it should be stored in a cake carrier or cut into slices and stored in an air tight container.

It will last up to 5 days in the fridge.

Make sure to tag me on Instagram @stephaniesweettreats and leave me a review below if you made this cheesecake. I hope you loved it! To get more ideas follow me on Pinterest. 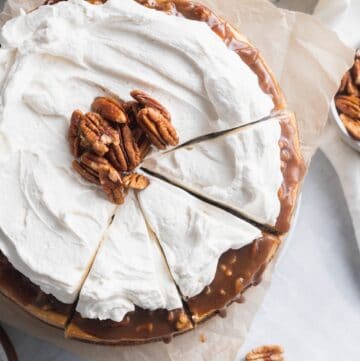 For the filling and the topping make sure to use larger chopped pecan pieces to get more texture in the cheesecake. Crust: Butter- If the crust is a little dry, add an extra 1-2 tablespoon of melted butter. Make sure to bake for 13 minutes to prevent soggy crust Filling: Browned butter- This is optional, but it gives the filling more flavor. Make sure to cook it until it thickens slightly. Otherwise it will be too runny after it gets cut into. Cheesecake: All dairy ingredients have to be pulled out at least 2 hours before baking.