Oct 28, 2021 by Stephanie Rutherford · This post may contain affiliate links · This blog generates income via ads 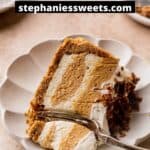 This swirled no bake pumpkin cheesecake is the perfect option if you don't want to bake a cheesecake. It has a graham cracker crust, layers of pumpkin, regular no bake cheesecake swirled together, and whipped cream.

It is topped with a cinnamon crumble that gives it a great texture. This is perfect for the fall season and holiday season.

This no-bake pumpkin cheesecake was made for those who don't want to bake anything for Thanksgiving dessert. This recipe is very easy to make and it tastes just like fall.

There are swirls of pumpkin and cheesecake together. It gives it the perfect flavor. If you don't like pumpkin pie but like pumpkin, you will love this. It is the perfect dessert to follow up your Thanksgiving dinner and the best part is it is an easy recipe.

If you are looking for a bake pumpkin cheesecake recipe, try Double Layer Pumpkin Cheesecake.

Here are the steps to make this cheesecake.

Next, compact into a 9 inch springform pan by using the bottom of a measuring cup. Make sure to use your hands to go up the sides of the spring form pan.

STEP 3: Make the regular cheesecake batter. Beat the cream cheese and sugar in a large bowl on high speed. You can use a bowl of a stand mixer or an electric mixer (hand mixer).

Then, add in vanilla extract and sour cream into the cream cheese mixture on medium speed. Divide the batter in half.

STEP 4: Make the pumpkin cheesecake batter. Next, mix in pumpkin puree and spices on low speed.

Be VERY gentle when folding in the whipped cream. Fold using a rubber spatula until is combined for both cheesecake fillings.

Spread the rest of the regular batter on top. Next, spread the pumpkin batter.

STEP 7: Chill. Chill the entire cheesecake overnight preferably. Wrap it in plastic wrap or aluminum foil before chilling. It needs plenty of time to chill before cutting into.

A common problem people have with no bake cheesecakes is the creamy cheesecake itself won't set.

This is because of 2 possible reasons.

Can I use cool whip instead?

Yes you can. Just measure out the cool whip that goes in the cheesecake batter. I prefer making my own whipped cream so there aren't extra preservatives.

Can I make this into mini cheesecakes?

Do I need parchment paper?

If you are keeping the cheesecake on the bottom part of the springform pan, you don't need it. If you are removing it to a platter, then use it for easy removal. When you do move the cheesecake go quickly because it is not as sturdy as baked cheesecake.

Store this swirled no bake pumpkin cheesecake in an air tight container like a cake carrier and keep cold. It will last up to 5 days.

This cheesecake can be stored decorated in individual slices. Store in an airtight container and freeze up to 30 days. Thaw for 1 hour before enjoying.

You can make this ahead of time. Freeze the cheesecake after its initial chill time. Wrap it tightly and freeze up to 30 days. Place it on the counter to thaw for 1 hour. You can place it in the fridge for 24 hours to thaw as well. 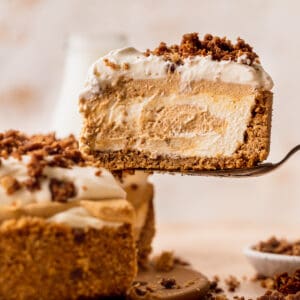