Sep 26, 2021 by Stephanie Rutherford · This post may contain affiliate links · This blog generates income via ads

This cinnamon roll cheesecake tastes just like a homemade cinnamon roll! It has a graham cracker crust, baked creamy cheesecake, and three layers of cinnamon filling. The cheesecake is topped with a glaze and mini cinnamon rolls. This a must bake for the holidays.

This cheesecake is creamy, dense, and fluffy all at the same time.

Here are the steps to make and bake this cheesecake.

Press the crust into a 9 inch springform pan using the bottom of the measuring cup.

Make sure to line the bottom of the pan with a 9 inch parchment paper circle. Spray it well with baking spray.

You can use a stand mixer or an electric mixer (hand mixer). Make sure to scrape the sides of the bowl using a rubber spatula.

STEP 7: Bake the cheesecake. Use a water bath and bake for 75-95 minutes. This cheesecake takes a little longer to bake with the cinnamon filling. Bake until the edges are set and the middle has a slight jiggle.

STEP 9: Pour the glaze. Drizzle the glaze on top of the chilled cheesecake.

Here are all my tips to get the best cheesecake consistency with no cracks.

First, all of the ingredients need to be pulled out 2 hours before. This part is so important to get a creamy consistency.

Beat the cream cheese on high for 1 minute. Set the timer and let it beat. Then, add in the sugar and beat again.

After every single step, scrape the bowl. This helps to make sure everything is combined, and no chunks of cream cheese remain at the bottom.

Then, add in the wet ingredients. Beat on high until very creamy.

This next part is where it needs to use as little air as possible. Add in the eggs and mix until just combined.

Too much air will cause the cheesecake to rise fast in the oven and then collapse, which causes cracks.

Use a water bath. This is very important!

I tried putting a roasting pan of water in the bottom rack with cheesecake above. The cheesecake dried out because the moisture wasn't surrounding it the same.

Use one of the 2 water bath techniques that I mention in the recipe.

Can I make this ahead of time?

Yes you can. After the cheesecake chills for at least 6 hours, take it out of the pan. Then, wrap tightly and freeze up to 30 days. Thaw for 1-2 hours before decorating and enjoying.

Can I make this into bars?

Can I make this with no eggs?

I have not recipe tested this. If you make this with an egg substitute, let me know.

Store this cinnamon roll cheesecake in the fridge in an airtight container. It will last up to 5 days.

Freeze this cheesecake into individual slices. Wrap each slice in cling wrap and store in an airtight container. Freeze up to 30 days. Thaw for 1 hour before enjoying.

Other Cheesecake Recipe To Try 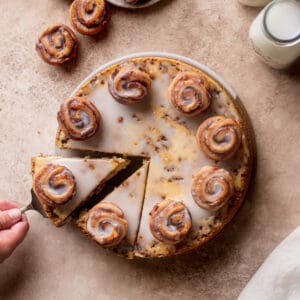 Make sure to pull out the dairy ingredients 2 hours before baking.